Wondering How to be a More Patient Parent? 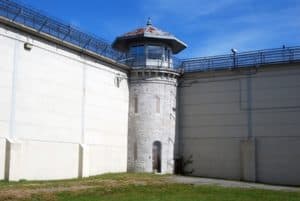 Kids can make decisions with consequences that stay with them for a lifetime. Although they may not fully understand the severity or lasting impact of their actions, justice will is still served by the system in accordance with the law.

Can a child go to jail? Yes. Children do go to jail for breaking the law. Minors who commit serious crimes like murder can be tried as adults and if convicted could serve their sentence in an adult prison. Most will be sent to juvenile detention centers where they will be held with other youth.

If you are a parent who has a child you think is going down the wrong path now is the time to step in and help them straighten up. There are many environmental factors that can be changed to help them get on the right track so they don’t face the same fate that so many other children do.

Why Children Go to Jail

Children go to jail for violating the law. Most of them are repeat offenders who wind up in juvenile detention facilities. According to the U.S. Department of Justice 43% of youth in custody committed a crime against a person.

These crimes include murder, rape, kidnapping, robbery, assault with a weapon and assault without a weapon. 45% of youth in custody committed a crime involving property like burglary, arson or theft. Other reasons for incarceration include drug-related offenses and public orders.

It should be noted that many of the children who are detained have been previously involved with the criminal justice system and are serving their sentence for their most severe crime. As youth continue to be involved in criminal activity, the general trend is their crimes tend to get worse over time.

Which Children Go to Jail

Minors who do go to jail are most often 16 or 17 years old. Children who are 10-12 years old makeup just 1% of all kids in jail. 85% of incarcerated youth are male and 15% are female. 35% are White, 32% are Black, 24% are Hispanic and the rest of the population are other single race or mixed race. A majority of incarcerated kids have some form of mental illness.

Kids who go to jail performed lower academically than their non-criminally active peers. They have a  history of poor school attendance and get left back more often. When they are in school, they tend to get in trouble more often and have higher discipline and suspension rates as a result. Of the children who are not enrolled in school when they arrive at a juvenile detention facility, only 3% of them have their high school diploma.

26% of offenders repeated a grade prior to the year they entered custody. About half of the youth in custody have been left back. Over half of kids in juvenile detention admit to skipping classes and 57% of those students were suspended from school in the past year. About 85% of the kids in detention have committed a previous offense.

The prison system is notoriously underfunded and there are few resources dedicated to enhancing the experience of the inmate. Staff is spread thin, therefore supervision can be lacking in areas where it is needed even if the staff is doing there best to properly manage the environment.

Living conditions are undesirable. Living quarters are tiny and the food is poor. Physical exercise outside is often only permitted twice a week. Visitation can be as little as once a month.

How Parents Can Help At-Risk Youth

Parents who wish to avoid this fate for their child should consider getting back to the basics. The number one thing you can do is connect. All children need to know they are loved and that their parents believe in them, but at-risk youth need it more.

In showing how much you care for them by taking the time to connect will help to rebuild their self-esteem, security in themselves and their sense of worth. This will be foundational in helping them reestablish themselves.

Your home will probably need some revised structure to help give your child more focus. Believe it or not, some meaningful responsibility could go a long way in helping them realize their contributions matter. You may consider doing things with them instead of just assigning them things to do around the house. The additional time together can be very valuable if they are experiencing a connection with you.

You also need to consider what you can be doing to support their education. At-risk students are usually behind in school. If your child is behind there is not a lot of sense in putting pressure on them to catch up right away.

Instead, you want to focus on building back the skills necessary to be successful a little at a time. Take the time to put the systems in place that will help them get back on track slowly. Remember that at this point how you do it will be more important than what you are doing. It must happen in a loving and caring way.

Sometimes parents need help getting their child back on track. There are many at-risk programs available for kids that attempt to help get them back on track before they wind up in prison. One common program that is often talked about is scared straight.

In prison awareness programs like this, at-risk students are brought through a local jail to see what it’s like in an attempt to deter them from criminal behavior. It’s not as effective as other programs, although some minors respond to the jail tour style intervention and express a desire to avoid experiencing a similar outcome. There is way more you can do as a parent to help your child.

A more effective program worth noting is the Youth Challenge Academy (FLYCA). The program’s Florida location has graduated over 4,000 students since its inception went on to enroll in college, learn a trade, join the military or join the workforce.

The program is based out of a military base and is run through a partnership with the National Guard. Students must apply to the program and they must demonstrate that they want to be there and change their lives around. Once in the program, they will take part in a highly structured program designed to teach them responsibility.

Their day begins at 4.45 with a physical training program. Then they are on to breakfast and inspection. All of this happens before class starts at 8 am. Devices are strictly regulated for educational purposes in the classroom.

Students are permitted one phone call per week and may gain other privileges for good conduct. Students who leave the program often report that feel they are more mature now know how to respect themselves and the opportunity life has presented them.

There are many other detention avoidance programs designed to support at-risk youth in making better decisions. Local high schools, police departments and (sometimes) military installations often have more information about how to take part in these programs and what their effectiveness rates are.

Where Can I Find a Local Youth Challenge Program?

Right here. Youth Challenge Programs are located all over the country. They are an excellent method to reach at-risk youth. The program has reached over 153,000 minors nationally. Academic research has deemed them to be an effective method of reaching many minors.

Please note that your child has to want to be there, as they are going to be pushed every day and must really have an inner desire to participate in the program. If they do, this is a program that can help to get them back on the right track.

Do Kids Go to School in Jail?

Most prisons and juvenile detention centers offer some form of education. They know that incarcerated individuals are already less likely to be less educated than the general population and that their stay is will exacerbate the problem, further negatively impacting their life outcomes.

Educators in prisons face the tough challenge of working with individuals who typically don’t want to put the effort in and work at the necessary level to be successful. It’s a tough place to get an education.

Dr. Patrick Capriola is the founder of strategiesforparents.com. He is an expert in parenting, social-emotional development, academic growth, dropout prevention, educator professional development, and navigating the school system. He earned his Doctorate in Educational Leadership from the University of Florida in 2014. His professional experience includes serving as a classroom teacher, a student behavior specialist, a school administrator, and an educational trainer - providing professional development to school administrators and teachers, helping them learn to meet the academic and social-emotional needs of students. He is focused on growing strategiesforparents.com into a leading source for high-quality research-based content to help parents work through the challenges of raising a family and progressing through the school system.

link to Children's or Childrens': When to Use the Possessive or Plural

Some people get confused about whether to use children's or childrens'. Many people wonder where the apostrophe should go and if the letter s should come after children. When should you use...

One thing people worry about most when applying for college is what happens after they submit their application. Applicants need to know what documents to submit and what information to add...

Support Strategies for Parents by visiting our ‘Recommendations’ page and using the affiliate links in our articles to shop. We receive a small commission (at no extra cost to you) so we can continue to create helpful free content. Thank you, we appreciate it!