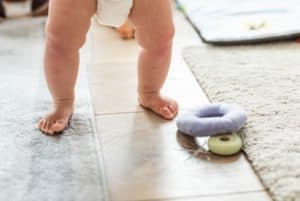 Diapers offer parents and toddlers security as the little ones get older and learn to take care of themselves. They allow the child to learn how to use the toilet gradually, enabling them to do it on their own over time while building their confidence. It can be tempting to keep using them as until we think our child is optimally prepared to transition away from diapers, but that may not be the best approach.

Should you keep your child in diapers? No, parents should not keep their child in diapers, especially an older child. A Child should be encouraged to get out of diapers as soon as they are ready, and parents should be helping them become ready. Typically, a child can stop wearing diapers during the day between 18-36 months and can stop wearing diapers at night between 24-48 months.

Sometimes diapers are leaned on excessively as a convenience rather than a tool to help the child learn to care for themselves. Today’s disposable diapers are easy to use and don’t require the high maintenance that cloth diapers did in the past.

They encourage parents and children to become complacent and continue to use diapers. Instead, parents should do their best to help their child get ready to move past diapers as soon as the child can be ready.

Why You Shouldn’t Keep Your Child in Diapers

As parents, we are tasked with the critical job of empowering our children to be independent as soon as possible. When we do, we enable them to discover the world on their own in more complex ways. It is important that we begin this habit for ourselves as soon as possible so that it becomes a cornerstone of our parenting philosophy and practice. The older a child gets, the more important this principle becomes.

Independence for your children is a principle you want to embrace early on to create mentally strong and healthy kids. Parents who make it a firm part of their parenting help their kids embrace responsibility and the fulfillment that comes along with doing things for themselves. Children who grow up in homes where independence is cultivated through age-appropriate responsibility are more likely to be satisfied adults.

Additionally, today’s modern diapers with high absorbency actually make it harder for the child to learn how to use the toilet because they don’t feel the sensation of being wet as much. Therefore they don’t make the connection between feeling like they have to relieve themselves and being soiled, prolonging how long it takes them to become aware of the need to use the toilet.

If you think you may be keeping your child in diapers a bit too long, ask yourself these two questions:

When is the Right Time for Parents to Potty Train Their Child?

By 2-3 years old parents should be potty training their child. It seems that the closer a family lives to the equator, the earlier they begin to potty train. It’s likely that the practice of potty training has been highly influenced by whatever our ancestors did before indoor plumbing and heating was a common convenience. Wherever you are from, 2-3 years old seems to be the cutoff, at least for how things used to be done.

The practice of keeping a child in diapers until they are 3-4 years old and later is primarily a western practice, most prevalent in the U.S. After disposable diapers started being mass produced families allowed the average age range of a potty trained child to rise from 18-24 months in the 1950s & 1960s to 3-4 years old today.

Parents who use more traditional methods seem to experience success sooner. Parents in countries that don’t have exposure to the many modern conveniences that we enjoy work very hard to make sure that their children are potty trained as soon as possible, and they are quite successful. Many of them believe that by the crawling stage or sooner, the child should know how to use the toilet.

It’s not just in undeveloped countries that children are trained sooner. Countries like India and China are holding on to their cultural methods of training their child to use the toilet sooner as well.

You should potty train your child as soon as they show signs they are ready. The earlier the better. The more natural the better. With some encouragement and patience, toddlers actually take on the task of learning to use the toilet quite independently.

Signs a Child is Ready to be Potty Trained

If you are ready to begin to try to get your child out of diapers, start by simply observing. Pay attention to potential signs like facial expressions or behaviors that tend to pop up before they need to use the toilet.

You should also be on the lookout for their awareness. If they have started to make the connection between having a soiled diaper and the feeling that happens before it’s soiled, they are probably ready to try the next step. One sign of this is that they start pulling on the diaper after it’s been soiled. Or, they may simply tell you directly.

Another sign is interest. If your child seems interested when others are using the toilet, chances are good that they are starting to make a connection and are trying to explore. You may also notice that their diaper is dryer for longer periods of time than before.

The signs won’t be 100% reliable, but they should be common enough that they give you the needed signal to get your child on the toilet so they start making the connection between the sensation they feel and being on the toilet when they feel it. There is no specific face or sound that you should be looking for. You simply need to make the connection between what your child does and what happens next.

How Parents Can Help Their Child Get Out of Diapers

Be consistent with frequent trips to the toilet and let them try to go to the bathroom there. When you think its time, but they are not ready, keep them close so they won’t have to travel far when the time comes. Offer them sufficient praise and make sure they know what it’s for. Each small action helps to make bigger connections.

Be patient and supportive, don’t scold, and give them the chance many times each day to learn why they are there. Some parents even make a soft hissing sound to help the child make an audible connection to toilet use.

Consider using diapers that don’t have ultra-high absorbency. They may be helpful in your situation. You will be helping your child experience the natural result of their bodily functions. As they become older and more aware of what that is like and the discomfort they feel they will begin to make a connection.

Do children ever go back into diapers after potty training?

Yes. Sometimes regression takes place and the toddler takes a step back. That is when it is most important for you to be consistent and supportive. Keep giving them opportunities to use the toilet, even if you have made the rare choice of putting the diaper back on them. Taking one step back to where they were a few weeks ago is fine, taking multiple steps back is probably unnecessary.

Is it ok to put your kids in diapers for car trips or long visits?

They will never grow to be independent if they are receiving mixed messages about when it’s OK to be independent. Being out of diapers is very symbolic to young children. It helps them feel grown up and they need to attach to that feeling so they can mature in a healthy manner.