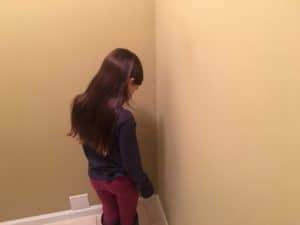 These days it’s hard to tell which traditional punishments are a bad idea and which are just simply out of style. Some are still fine to use today, while others can be truly harmful. Where does having a child stand in the corner fall? I took some time researching the answer to find out.

It is sometimes easy to forget that the things that we do today have their roots in historic practices that long predate any modern existing science and research. In this case, believe it or not, the roots of the idea are almost as old as the scientific method itself and the practice is about 200 years old.

I’ll talk a little about where this practice comes from and whether the science says it’s effective, then I will talk about what you can do instead to ensure your children grow into disciplined and respecftul young adults.

What History and Science Say

The idea of having a child stand in the corner was most famously used as a strategy in Victorian England and at about the same time in America when punitive discipline was the primary tool for maintaining control of kids. They were sent to stand in the dunce corner, sit at a designated dunce table, and/or wear the infamous dunce cap.

The idea was that all students would want to avoid being put on display in front of the class or labeled a “dunce”. Each method was intended to produce the same outcome, compliance through shame.  Each approach got its name from the same place as the dunce cap itself, John Duns Scotus (born around 1266).

He was a philosopher during the Medieval period that believed pointed hats stimulated the brain and funneled wisdom to the person who wore it, presumably from the heavens.

Later as the Renaissance and the Enlightenment produced great thinkers and ideas, his views and the name Duns (pronounced dunce) itself became synonymous with “idiocy”.

After the Victorian period, our society slowly realized that shaming kids was wrong and we have moved away from the practice. However, some remnants of the era, like putting children in the corner still remain. In fact, in the U.K. they still call it the dunce’s corner.

Although we don’t call it that here in the U.S., it is used for the same purpose. For those willing to understand the history and original intent of the practice, it is clear that separating kids from others and putting them on display in front of them is not healthy.

It produces a similar culture of shame that the Victorian practice did and does nothing to help the child learn from their mistake with dignity and respect.

Any disciplinary action you choose to implement with your child should have their best interests at heart and should be carried out with love and empathy so that they can grow from it.

Once we look at the history of this practice it does not appear to come from a place that is beneficial to children. The science on the subject supports this as well.

Over the past 40 years, a great deal of scientific research has been conducted on the shaming of children and has confirmed that it is a bad idea.

Although most people agree that making a child wear the dunce cap is a poor decision, the dunce corner has not been as easy to eliminate.

Having a child stand in the corner may seem helpful at the time because it takes them out of a situation and makes an example out of them for any other children present, but it is a shaming strategy and can have serious long-term consequences.

There are significant immediate and lasting impacts of using shame as a disciplinary strategy for children.

For those who are using it to produce good behavior in the child, two questions should be asked: Is the resulting behavior truly natural or coerced and what will the cost be to the child’s well-being?

Is the resulting behavior natural or coerced?

Natural behavior reflects who the child really is.

It is how their thoughts, actions, and habits organically become part of their character.

Coerced behavior reflects the child acting out of fear of consequences without really understanding the why (except to avoid the consequences).

Although this can seem like a great idea to modify the short-term behavior, it is not good for their emotional development.

If coercion through shaming is a consistent part of their lives, it can create some very undesirable character traits, which I talk about below.

What will be the cost to the child’s well-being?

What is said and/or done to a child by a loved one or authority figure can greatly impact their sense of self-worth.

This is because their self-identity is shaped by what they hear about themselves and how they are treated.

Children in these situations often feel insignificant because they think they are just bad kids.

They don’t learn anything that way. They may sometimes do what you want them to do as a result of a natural desire to try to please you.

Be aware, this may be a false signal of success.

If you have used a disciplinary strategy that may have brought shame, ask yourself these questions:

The answers to the above questions are for you to reflect on and should help you start to figure out if they are starting to put up a wall.

Instead of thinking about the use of this strategy as an immediate tactic to change the behavior ask yourself if this approach to discipline is something you want to be a part of your family culture.

It’s understandable why parents and caretakers are tempted to use shaming strategies like making a child face the wall or putting their nose in the corner. They appear to work. In the short term, they can modify the child’s behavior and in the heat of the moment we just want to correct the behavior so we can move on with everyone’s day in peace and try to enjoy our time together.  But you should try to remember this; shame is an inhibitor. It does not solve problems, it just buries them and causes the child to fear not being good enough (among other things).

The feeling of disapproval caused by shame makes the child think others do not approve of them – leading to withdrawal and other worrisome emotional reactions. In the short-term, the child may react by trying to please the parent. According to the studies on what happens over the long term, it’s not worth it.

As these feelings build up over time they compound and can manifest themselves as hostility, self-doubt, passive-aggression, and even rage.

A life raised with shame can become a life of self-consciousness and internalized humiliation.

Although we may think we are helping our kids by giving them a time out and making an example of them in the corner, we surely don’t want to create any of these feelings in them.

Yet, according to the research, that’s exactly what putting them in the corner can do. Over time, shaming strategies even hurt their relationships with others.

A child or teenager who is put in the corner is implicitly (and sometimes explicitly) labeled as the bad kid (even if it’s just siblings or friends watching). Over time, they get used to this label and begin to understand themselves as the person who belongs in this role. It’s really just the nature of a child adapting to their environment.

That’s not the kind of adapting we want them to do. They need to learn how to feel in a situation and experience how others feel. They cannot do that if they are repeatedly removed from the situations that they need the opportunity to learn from. As they grow more disconnected it gets harder for them to develop empathy, a key personal and professional skill they will need in adulthood.

So what can we do?

After doing this research it’s clear the science and history don’t support using shaming strategies as a tool to help kids learn right from wrong. Try to remember that most of the time behavior is developmental and if you stay positive and supportive through each period of a child’s life, they will grow out of the short-term behavior and be better off for it in the long run.

The core of any parenting approach should be love, compassion, connection, meaningful structure, and discipline that develops personal responsibility. You can learn more about how to consistently show these qualities to your children in the article I wrote on the topic.

Some better ways to help a child learn to improve their behavior include:

There are many other strategies that you can explore on my site, I listed some powerful ideas in this article. These are all “long game” strategies that win out in the end. It can be easy to fall into the short game trap because we don’t want our kids to develop behaviors that will lead them down the wrong path, but they often don’t pay off later.

If you read my articles a lot you know that I am no pushover. I believe deeply in the firm but fair mindset when it comes to disciplining kids. I embrace this approach with my own kids and with students. I expect my kids to behave, and work with them daily to make sure they are growing into respectful well-adjusted people. For this approach to work, I know it must have love and respect for the child at the core.

It is incredibly important (and one of the most difficult things in the world to do) to model healthy behavior all the time.

None of us are perfect. However, we should still strive to do the best we can each day and learn from the best information out there to become a little bit better one step at a time.

How do you effectively use time out?

Timeouts should be used to break up the action and give the child some time to calm down.

A general rule of thumb is one minute per year old, but that can vary. You may just want to let them come out when they are ready.

Toddlers are especially unpredictable because they may not remember why they are there in the first place and get scared.

How do you discipline a defiant child?

When working with a defiant child you have to stay calm and steady. Remind them about expected behavior.

Be clear about rules and consequences. Give them opportunities to practice the desired behavior and praise them when they do.

Most importantly, connect and remember that when you discipline you are trying to create a disciple.