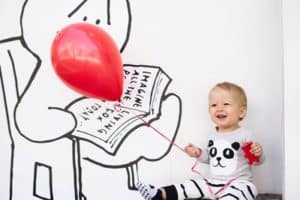 “Who wants a noodle? Yummy, yummy noooooodle!” It’s a typical conversation between a mother and baby. The mom uses child-directed speech or baby talk, as she teases a smile out of her child, who is sitting in a high chair, eating lunch.

What Are the Characteristics of Child-Directed Speech?

Child-directed speech with these characteristics can be found in different cultures around the world. It has naturally cropped up in many different countries and languages, suggesting that it’s a universal human adaptation (source).

Because child-directed speech is so common, there must be some advantages to using this sort of speech with infants. Or, is it just one of those silly things we do?

Researchers have been investigating this phenomenon and their findings are fascinating. Discover some of the advantages below: 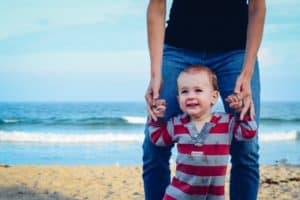 Scientists have studied child-directed speech in a growing number of studies. In many of the studies, researchers use special “onesies” equipped with microphones to record what real babies or toddlers hear on a daily basis. Then, they painstakingly listen to the recordings and map out how much child-directed speech the children hear, as well as the content and characteristics of the language. Most studies also evaluate the child’s responses and their cognitive abilities over time.

So far, these are the main advantages scientists have discovered:

According to one study, children who heard more child-directed speech developed more language processing abilities. They could identify the correct image after a word was said more quickly and accurately than children who experienced less child-directed speech. Researchers believe that children first became quicker and more reliable at speech interpretation. This then helped them learn new vocabulary words (source).

This is because child-directed speech often makes new words clearer. Imagine you’re learning a new language. If someone spoke to you in that language without consideration for your learning status, it might be hard. But, if they slowed down, repeated themselves, and enunciated clearly, it would be easier for you to pick up new words. The same is true for babies.

Five-month-old babies prefer individuals who use child-directed speech with them. Essentially, infants bond more with those who use baby talk. Researchers think that babies might seek out these caregivers because they may provide the best care and most opportunities for learning (source).

Infants pay more attention when child-directed speech is used. The higher voice and facial expressions that accompany baby talk capture the attention of babies. It’s like pressing a button that says “this is for you!”

These advantages of child-directed speech should make you quite confident to use it with your own little ones and other babies you encounter. Not only will you make a connection, but you can help the baby advance on their journey to conquering language.

Despite these many advantages, not all of the research comes in crystal clear. Some studies have found different outcomes that suggest child-directed speech isn’t the ultimate solution for helping babies learn language.

This suggests that children can indeed acquire language in the absence of child-directed speech. In other words, it’s not necessary. So, if using baby talk feels awkward or silly to you, don’t! You can talk normally in good conscience and without fear of stunting your child’s language development.

Another possible disadvantage is that baby talk could limit the vocabulary you use with your child. Some studies show that using more complex language and a wider vocabulary produced the best results in helping children increase their vocabularies (source).

If you remember, studies also showed that child-directed speech helps babies build their vocabularies. How is it possible that both simplistic and complex language are responsible for language gains in children?

It could be that there’s a sweet spot between the two. Perhaps you use simplistic baby talk with your child, repeating yourself and using a sing-song voice. But, you also use a wide vocabulary, incorporating more and more words whenever you can. Maybe you also read books to your child, exposing them to a wider range of vocabulary words that in turn builds your child’s word bank.

This relates to other research that shows that the more words a child knows, the more academic success they’ll achieve (source). Vocabulary knowledge is closely linked to reading comprehension abilities. And this plays an integral role throughout all subjects at school.

Vocabulary acquisition starts at an early age when children are hearing new words. In fact, studies show that lower-income children may hear up to 30 million fewer words than children from wealthier families. Researchers even noticed this in children as young as 18 months old (source).

So, don’t let your baby talking limit your vocabulary choices. Instead, beef it up and repeat yourself often, even when using more adult words. For example, you might name the shapes of your child’s blocks with decidedly un-baby like words such as “cube,” “prism”, or “sphere.”

As you can see, the disadvantages of child-directed speech fall far from discounting its usefulness. However, they do provide important context. Whereas before you might have shied away from using big words with your baby, you can now do so with confidence, knowing it will help them grow their vocabulary.

Now, when it comes to practical, everyday life, how might you use child-directed speech?  You’re probably already using it. But, some intentional thinking about how you could use it may help open up yours, and your baby’s, conversations.

How Can Parents Use Child-Directed Speech?

So far, we know that child-directed speech has some defining characteristics. However, we haven’t discussed purpose. Child-directed speech can be used for many different reasons and understanding them can help parents be more intentional about talking to their young children in the best ways.

Researchers have hashed out four basic purposes for child-directed speech:

During interactive speech, a social feedback loop starts to take place. For example, the baby might look at something, which prompts the parent to talk about it. Then, the baby vocalizes, saying “oh!” or “bah!”. The parent responds again. While it doesn’t seem like much of a conversation is taking place, it’s exactly how children begin to understand the patterns of talking with others, researchers assert (source).

Now that you have a good understanding of the purposes of child-directed speech, it’s time to put it into practice. Research shows that no matter what your socio-economic background, the more you engage with your kid, the better their language outcomes will be (source). All you need is the confidence and know-how to talk with your child.

Practical Ways to Use Child-Directed Speech 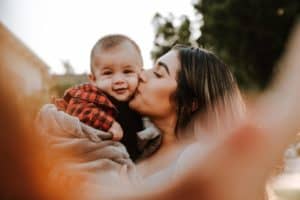 As you practice these different ways to use child-directed speech, you’ll become more and more comfortable talking to your baby. Before you know it, you’ll begin to enjoy the results when your baby starts understanding language and then talking!

Child-Directed Speech in a Nutshell

Child-directed speech offers parents a powerful tool to help their young children learn to process language and build their vocabularies. This type of speech helps young children excel in language, giving them an important advantage that will help them as they grow. The key to success is that parents have confidence in their ability to talk to their children.

So, next time your 6-month-old starts vocalizing with a long string of “aaahaahaah!”, respond with a warm smile and say “Oh really?”

What may seem nonsensical is where babies begin to understand language. Baby talk teaches your child the building blocks of language, conversation, and vocabulary, effectively unlocking a whole new world.